Fast fresh flower delivery in Israel. We send flowers by hand in Jerusalem and 56 cities in Israel

Israel does not have a national flower that everyone agrees on, but the country does have a love affair with flowers. The cyclamen and the anemone are the two most popular flowers that the Israeli people consider as their national flowers, but flowers play a larger role in Israeli culture than just as a national flower. Easter lilies line the streets of the capital city of Tel Aviv during the Christian Easter celebrations, though this is not a Jewish tradition. Flowers are generally not used during funerals, but many Israeli citizens do place delicate garlands on the cemetery graves. The most common flower in Israel is the red anemone, and this can been seen in the springtime around the Negev desert. In the city of Haifa, the annual international flower festival is a good time to see Israel’s short but beautiful flower season, and Moshav Kedma is a good place to pick flowers in the Israeli countryside.

Here is a comprehensive list of all the cities/towns and areas we deliver flowers to in Israel. If you wish to deliver to somewhere else (not listed here) please contact us first before placing your order. Generally speaking next day delivery is available to these cities if you place your order before 2:00 PM the previous day. 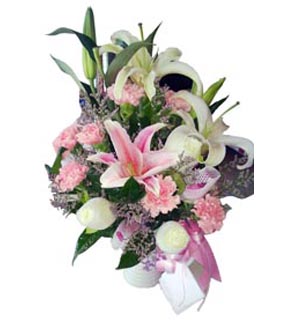