Fast fresh flower delivery in Jordan. We send flowers by hand in Amman and 7 cities in Jordan

In the Jordanian capital city of Amman, visitors will be treated to the sight of hundreds of colorful flower stalls. The most prominently featured flower though is the stunning and elegant black iris. As the national flower of the country, the black iris can be seen engraved on buildings and is even featured on Jordan’s U.N. anniversary. Springtime in Jordan can bring out over 2000 species of flowering plants, making this desert nation a true oasis. Some of the more commonly seen flowers include almond flowers and dainty calla lilies. Roses, orchids, and confetti flowers are also commonly grown around the city. The people of Jordan love to decorate their homes with flowers, and arrangements with orchids and lilies are common. Roses are also popular along with iris filled vases. One of the most popular flowering sights in Jordan is the Flame tree in the Rift Valley. These large red trees provide a large red umbrella of shade during the warm, sunny month of June. Along the valley, spectators can watch in wonder as the trees burst into bloom following the lines of the valley and the heat wave. They can also be found blooming at the Aradia intersection. Other native plants include the glorious red poppies and the delicate anemone.

Most Popular Flower Delivery Jordan Cities(you can see ALL the cities in the Cities menu!): Amman , Az Zarqā’ , Irbid , Russeifa , Wādī as Sīr , Wādī as Sīr

Here is a comprehensive list of all the cities/towns and areas we deliver flowers to in Jordan. If you wish to deliver to somewhere else (not listed here) please contact us first before placing your order. Generally speaking next day delivery is available to these cities if you place your order before 2:00 PM the previous day. 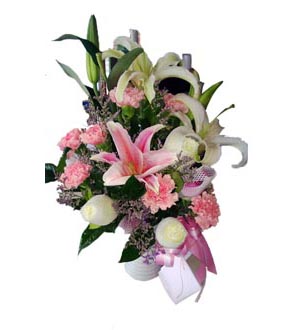