Fast fresh flower delivery in Nepal. We send flowers by hand in Kathmandu and 8 cities in Nepal

A country with strong traditions, flowers figure prominently in Nepalese customs. One such festival is the Tihar. The festival centers on the worship of nature and is a five day long celebration. On the second day of the festival, worshipers gather flowers to give to their dogs. Beautiful garlands of wildflowers are made to encircle the necks of the animals and give thanks for their friendship and love. In the capital city of Kathmandu, the national flower is represented by the red background of the flag. The red rhododendron is the national flower of Nepal, and can be found blooming throughout the small peaceful nation. Lying at the foot of the Himalaya mountains, there are over 6000 varieties of flowering plants, including 363 species of orchids. During the Dashain festival, the seventh day is marked by the carrying of large flower bundles from the old palace to the city of Kathmandu. The ten day long festival celebrates one of the victories of the goddess Durga who defeated many hordes of demons saving the land for the devout. Some of the popular flowers used during the festivals include bright colored orange and red marigolds and red china roses. Throughout the capital city, visitors will also notice the scent of Arabian jasmine in the air as it winds its way up the garden trellises.

Here is a comprehensive list of all the cities/towns and areas we deliver flowers to in Nepal. If you wish to deliver to somewhere else (not listed here) please contact us first before placing your order. Generally speaking next day delivery is available to these cities if you place your order before 2:00 PM the previous day. 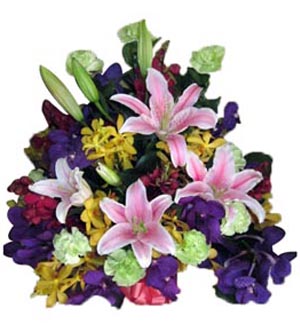